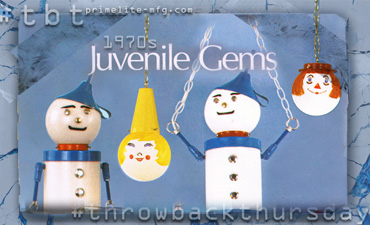 #tbtPrimelite: Another blast from Primelite’s past! Today we’re again highlighting our “Juvenile Gems” selection of 1970s children’s globes. An earlier #tbt of children’s lights featured “Raggedy Ann” and clowns. This later 1970’s catalog introduced additional characters including the “Tin Man,” inspired by “The Wizard of Oz.” Our children’s lights were also now available as ceiling/hanging and desk lamps.

Primelite continued working with a local artist who hand painted each face/globe. The fixtures were then hand constructed and assembled in our warehouse. These fixtures were primarily used in children’s bedrooms and were popular throughout the ’70s decade.