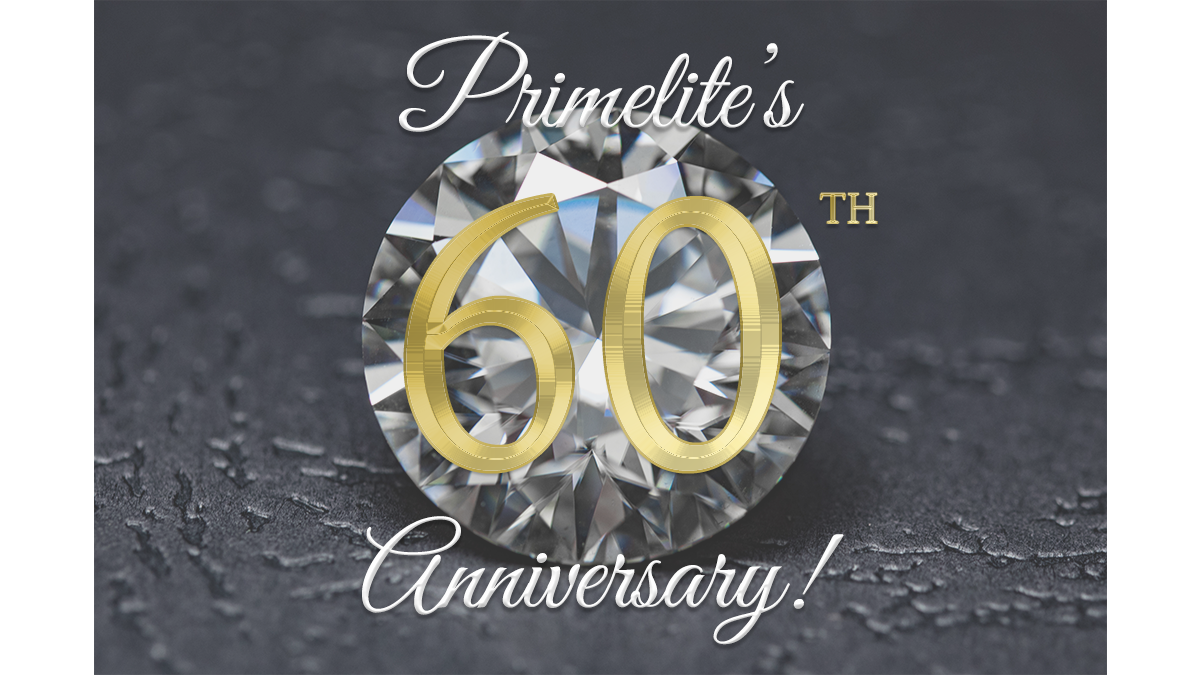 Happy Anniversary to us!

All of us here at Primelite Mfg. are excited to announce that we celebrated our 60th year in business last week! For the past six decades, we’ve been proud to be able to serve our customers and be a major force in the lighting industry here in the United States. In the spirit of celebration, let’s take a moment to travel back and explore our company’s heritage throughout all these years.

Our story starts on March 23rd, 1962 when Murray Rood and Irwin Heit decided to take the experience and know-how they had both gained by being previously employed in the lighting industry and became partners in a brand new business venture. That day, Primelite Manufacturing was born.

Each of them had their own strengths and skill-sets, allowing them to focus on different aspects of running their new business. Murray managed the day-to-day operations at the office, responding to quote requests and processing customer purchases, while Irwin preferred to be on the road bringing in orders and finding new clients.

Together, Murray and Irwin worked hard daily to transform their vision of an all-American manufacturer of top-quality lighting fixtures into a reality. However, it would take some time before Primelite fully evolved into the lighting industry leader we are today.

In the early days, Primelite focused exclusively on assembly. Our fixtures were much simpler back then as well, mostly polyethylene globe fixtures, but also some wooden pendants. Check out our #tbt series of posts about our older fixtures!

Eventually, Irwin had the idea to repurpose a compressor from one of his old Coke vending machines into a full-line spray equipment. And so, Primelite was now able to offer painting services for their fixtures.

A few years later, the pair decided to add a collection of colonial-style fixtures with long arms and mostly candle base bulbs, creating the elegant and popular Williamsburg line of Primelite luminaries.

Murray and Irwin’s ingenuity and drive led them to continue striving towards their goal and in 1972 they acquired a wrought iron fabrication facility that would give Primelite many of the manufacturing capabilities we have today. Primelite now had access to benders, welders and threading machines, significantly increasing its production potential and transforming the company from an assembler into a real full-scale lighting manufacturer.

Now that Murray and Irwin’s dream was finally a reality, business started to boom and big jobs began rolling in. The first of such opportunities was with the Green Acres Shopping mall in Valley Stream. Later, Primelite went on to supply Dunkin’ Donuts with some of their iconic lighting fixtures: 18” cord pendant domes painted donut pink.

Murray and Irwin continued leading Primelite together until Murray’s passing in June of 1975, after which Irwin went on to run the company with his wife Sylvia. Nine years later in June of 1984, Irwin and Sylvia’s son Ben Heit joined Primelite’s management team. Before then, Ben had been working regularly for the company while still in college as the Upstate sales representative.

Under Ben’s leadership, Primelite continued to experience sustained growth. We began selling prismatic shades as well as supplying major companies, like Subway Sandwich Shops and Ben & Jerry’s Ice Cream, with most of their lighting needs. In 1989, Irwin decided it was time to retire and fully pass on control of the business to Ben. However, true to his industrious work ethic, Irwin continued coming in to work regularly for the next 23 years.

In 1993, Alex Madrigal, our current President, joined the Primelite family as well. Starting as an assembly line employee, Alex moved up through the company until also becoming an integral part of the management team.

The next year was a period of innovation for Primelite Manufacturing. It was in 1994 that we produced and sold our first angle sign shade, now a hallmark of Primelite’s fixture catalog. The first customer for this new design was a shoe store across state lines, which “was in such a rush for the fixtures that I had to drive up to Vermont to deliver them,” Ben reminisced.

Then in 1997 Primelite stepped into the digital age with its new website. In truth, it was just a scanned and digitized version of our paper catalog, but it worked well as a reference guide for our customers and the orders kept coming in.

By the time 2004 rolled around, our goosenecks and sign lights were in full swing. Not only that, but our web traffic was skyrocketing and we were becoming a national company. We even began getting regular orders from as far away as California, which at the time was new for us.

That year we decided to add an eight-page gooseneck flyer to our catalog, which really put our gooseneck fixtures on the map. Even then, our main focus was providing our customers exactly what they needed and our ability to manufacture our lights to their exact specifications ensured that.

For us, customization has always been key and so we began modifying our existing designs as needed: longer or shorter arms, special bends and custom colors. For us anything was possible and our flexible approach made our fixtures stand out from all the rest.

It was during this time that we added powder coating and a new bending machine to our manufacturing abilities. Not only did we have a superior product than the competition, but we could also now streamline the process to make them faster as well. We were now ready to meet the growing demand for our products head-on and fulfill all of our customers’ needs.

As time went on, not only did our catalog continue to grow but the Primelite family did as well. Irwin had loved that Primelite was a family business and he always expressed how all the employees and staff here were a crucial part of that family. As business expanded under Ben’s guidance, Primelite was able to expand our most valuable assets as well, our workforce.

Ben’s wife Joanne joined the company in 2010, serving our customers as the sales representative for the Florida area. As a retired teacher, she was able to utilize her skills to engage and educate our customers in Florida, helping them understand the added value that our fixtures can bring to the table.

The year after that marked Primelite’s entry into the world of LEDs. We began retrofitting our existing angle shade designs to accept energy-efficient LEDs. Currently, we’re on our 3rd generation of LEDs since we stepped foot into the field in 2011 and have no intentions of halting our push for innovation.

Since the field of lighting technology is ever-changing, so are we. Not only are we committed to integrating LED tech into all of our fixture sets, but we’re also excited to be able to be always growing, learning and integrating modern advancements into our dynamic designs.

Our most recent change came about in 2020 when Alex, now a nearly 30-year veteran of the lighting industry and Ben’s long-term right-hand man, became a full partner in the business and was introduced as Primelite’s new President.

As we reflect on the progress Primelite has made during the past 60 years, we also enthusiastically look forward to the advancements, challenges and changes that lie ahead. We are ready to continue creating a future driven by innovation and a desire to see our customers succeed alongside us for the next 60 years and beyond.

Check out some of the photos from our recent celebration!

And check out some of the photos from the past 60 years! 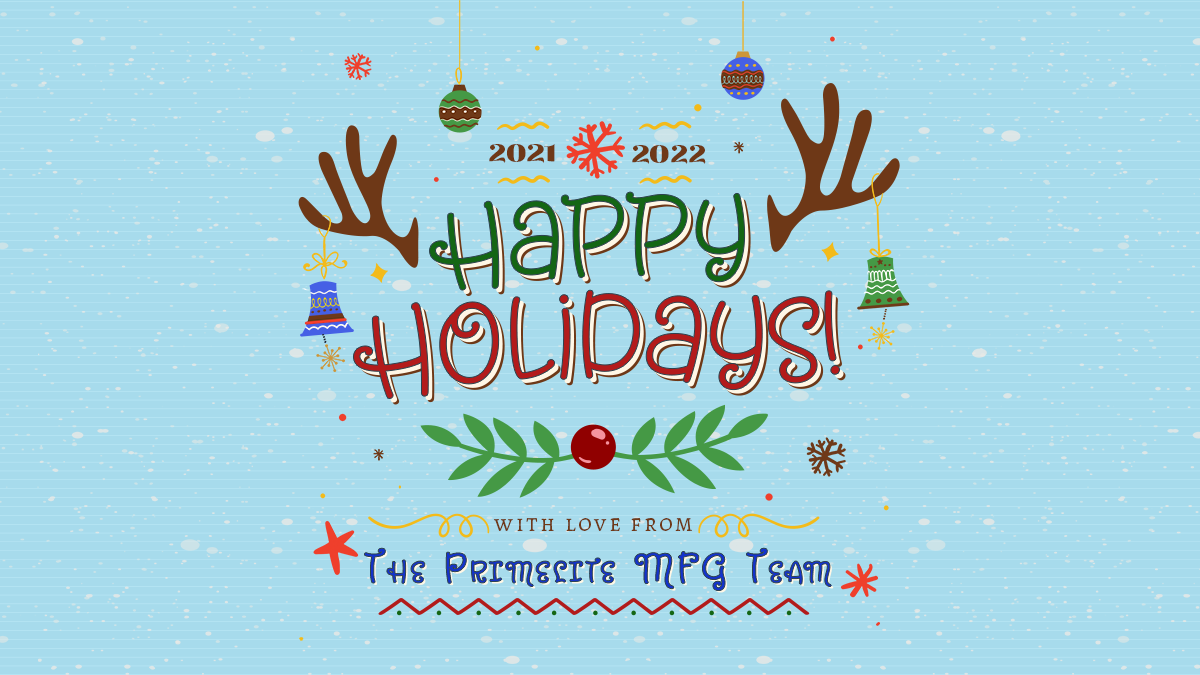 The time of the year when we celebrate everything that’s merry and bright is finally here! For all of us at Primelite, that means you, our amazing customers! Looking back on 2021, we realize just how lucky we are to have customers like you. We are excited to wish you a happy and blessed holiday season and sincerely thank you for all of your support during this challenging year.

As one year ends, however, another begins. We look forward to continuing to work with you in 2022 and believe that if we all allow our inner light to shine bright, we can build a better new year together.

Wishing you a wonderful holiday, and a Happy New Year!

The Team at Primelite Mfg